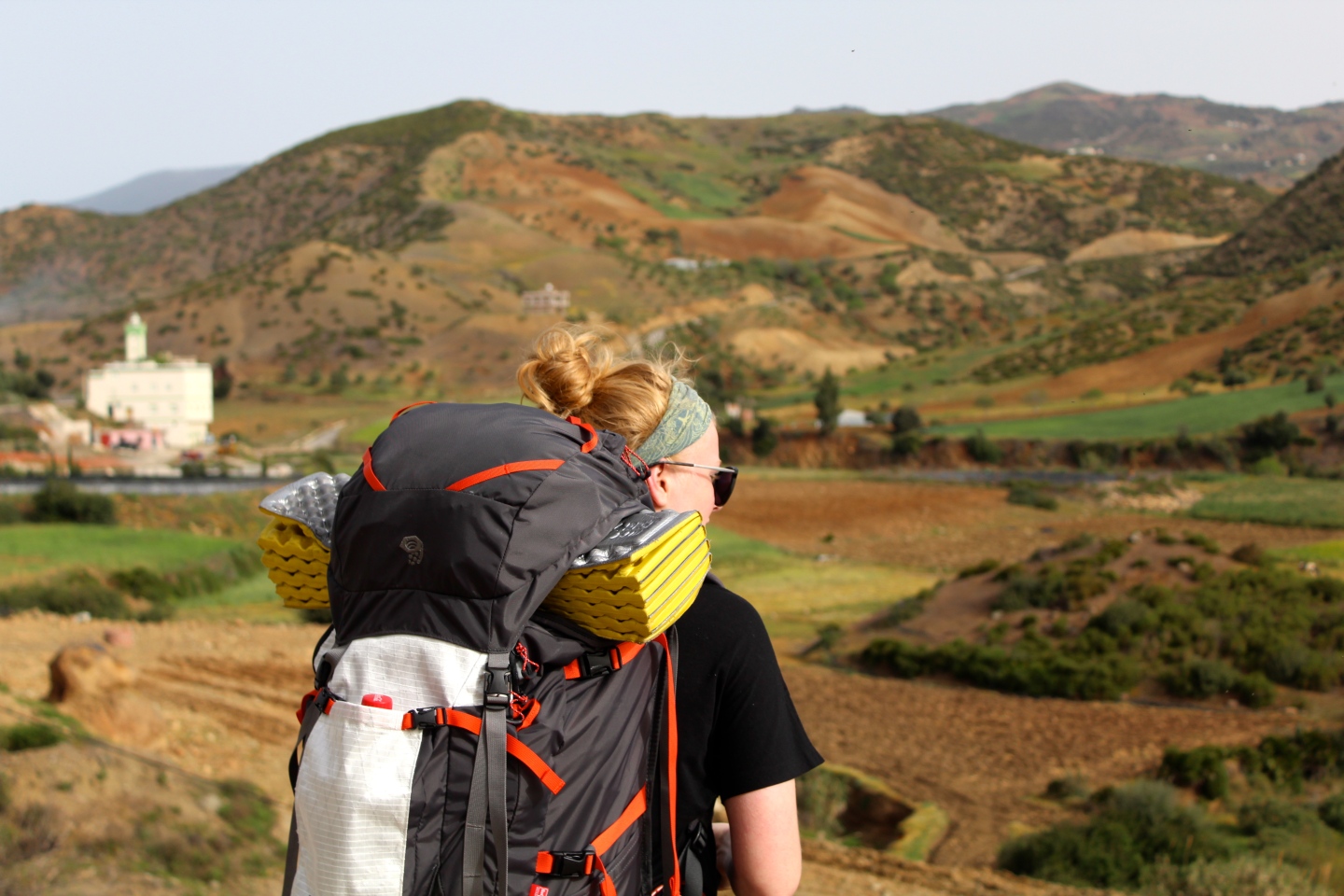 “Jaaaaaack-leeeeeeen?” “Jaaaaaaaaack-leen?” “Jack-leen!!!!” I tossed over in my sleeping bag and awoke to a flashlight illuminating my tent. “Haaaaa hiya!” (here she is!), a man wearing an army-green uniform and big black boots announced. “Wash katkhayfi?” (aren’t you scared?), he suggested. I silently squinted back, half-asleep and blinded by his flashlight.

Eight other gendarmes, similar to policemen here in rural Morocco, crested over the hill. “Lqitha?” (find her?), they asked their black-booted friend. They too spotlighted me with their flashlights. “Lqitoni” (you found me), I grumbled.

They gave us two options: either they’d stand outside our tents all night to protect us from wild dogs and supposedly “bad people” or we’d return to town. I translated the bizarre situation to my confused friends Tori and Joe.

“Can you just ask them to turn off their flashlights?” Tori suggested. “I want to look at the stars.” 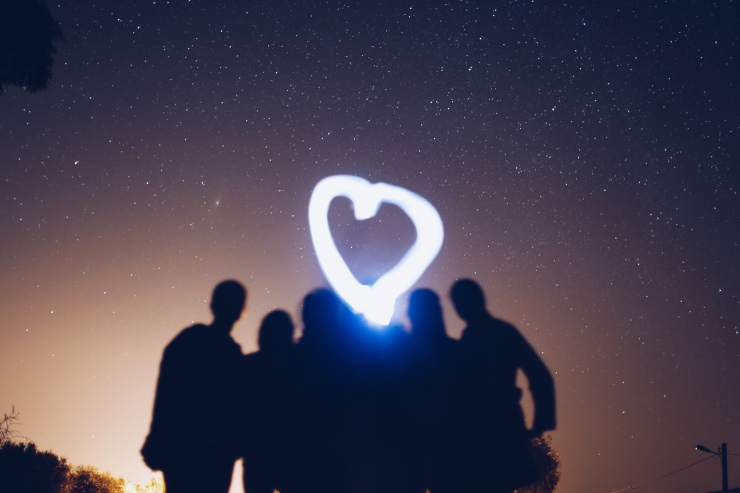 We decided to pack up but refused to ride in their van, so we night-hiked five miles back instead. Down the rocky ridge, through a village with no running water (but it does have a shiny new billiards table), past the olive groves, across wheat fields dotted with wildflowers and around the forest. All accompanied by a gendarme gang.

Our policey-pals had never hiked in their lives. Certainly not in the middle of the night. They kept trying to explain the trails to me as if I was the one who had never stepped foot on them.

Nonetheless, the stars were twinkling and we were hiking. I felt alive. 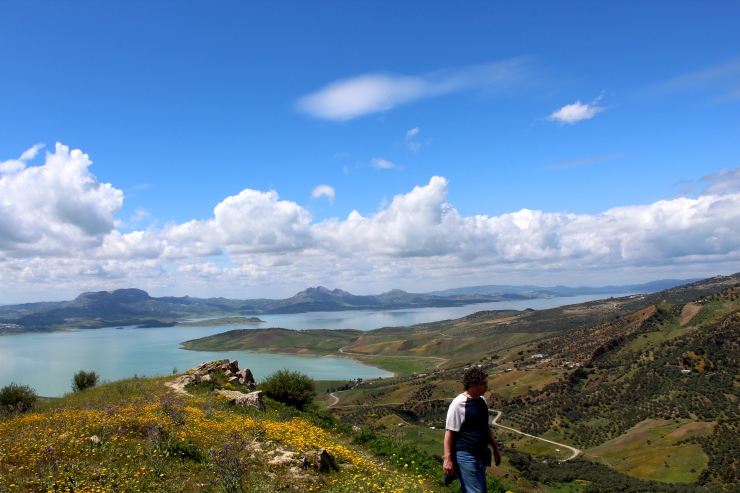 I’ve challenged my own freedoms and mobility this spring. I’ve plunged into many lakes. Made campfire oatmeal and coffee and s’mores. Discovered a passion for trail running. Bathed under waterfalls. Backpacked 70 miles through the Rif mountains. Along the way, we carried kilos of olives and liters of oil because everyone demanded we try their family’s olives. I’ve danced with the outdoor club kids and college friends under twinkly lights on my roof. Met an English-speaking philosopher-shepard in the middle of nowhere who bonded with my dad over ethics. Trotted with sheep stampedes and happy donkeys. Used goat hairs to paint pottery with my Moroccan grandma. Once, I even left a tent door open, and a wild monkey snuck in next to sleeping-Audrey and stole an entire baguette. This spring, I’ve yelped a lot. “The mobility scream,” Aud calls it. A wild, invigorating hoot that erupts upon feeling free, upon feeling alive. 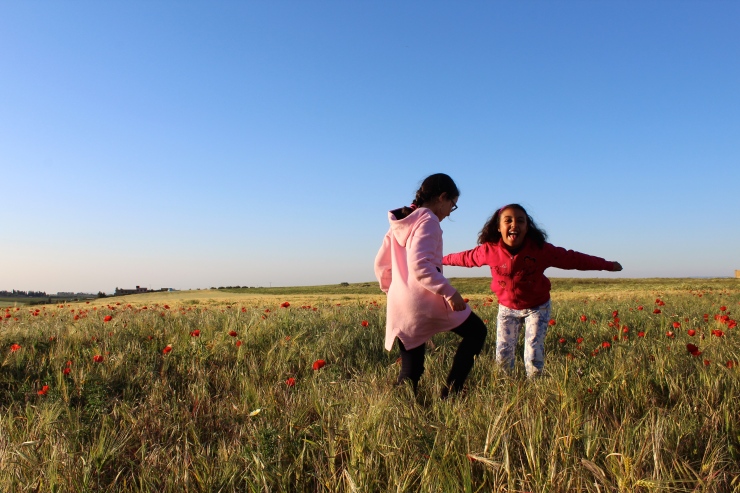 Last month while snacking on dried figs with Radia for breakfast, I outlined my new five-year-dream-plan with her. As I wrapped up the year 2024, she silently stared at me. Uncharacteristically speechless.

In six months, our lives will be totally different. Me: constantly on the move. Hooting and yelping. Her: forever in her kitchen. Cooking and cleaning. My plan of unbounded mobility is a foreign trajectory beyond her dreams. A life she doesn’t have the chance to live. How can I live so freely while others are so stuck? I asked aloud, not totally sure who I was asking. Maybe myself. Maybe Radia. Probably the universe. Everything is already written, Radia responded, we all have different destinies.

It was the first time we explicitly acknowledged the contrast of our futures, so we took a break from the figs and cried together instead. 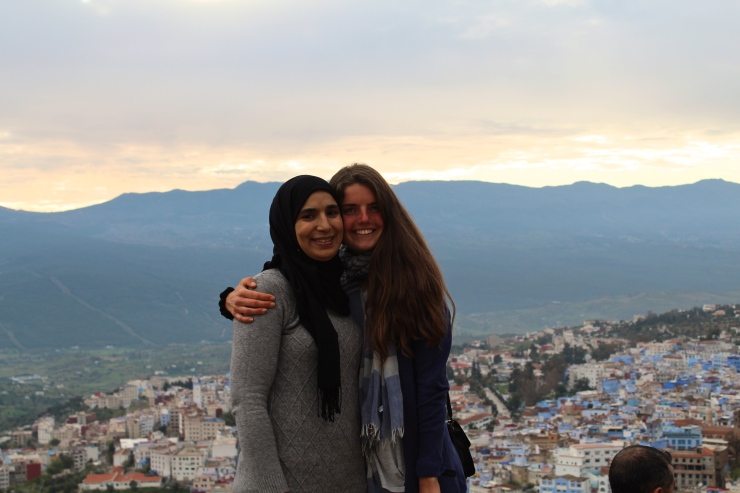 The complex physical and psychological constraints of loved ones in this rural Moroccan community disturb me. Coming to terms with their limited freedoms, especially in opposition to mine, has been the most taxing aspect of my Peace Corps service.

Despite the innocent stares of curiosity, the occasional men hissing and the gendarmes’ Big-Brother-ish patrolling, I move seamlessly through landscapes. However, social norms unofficially police other community members and limit their mobilities. Teenagers can’t relax in the town forest without risk of gossip that they’re smoking weed or making mischief. Men can’t enter other women’s houses. Girls can’t explore alone beyond the three-mile diameter of town. Most women in our community can’t leave their homes without their husbands’ permission. 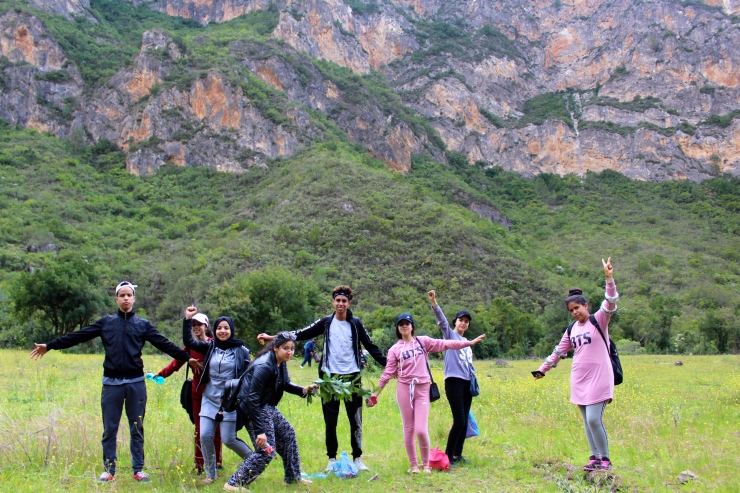 People, men and women, need valid reasons to physically move, according to cultural expectations in rural Morocco. As breadwinners, men have easier access to public spaces. Women, on the other hand, are child-bearers and housewives, confining roles by nature. 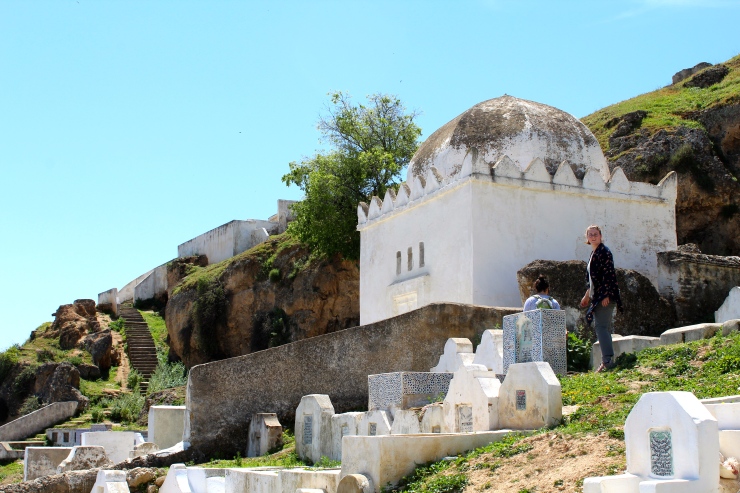 Many women do take pride in their housework, celebrating slivers of fulfillment. Assembling a Moroccan tajine is an art. Onions and fennel on bottom, green beans and squash on top. Making tea with fresh herbs is a ritual. Squeegeeing the floors is a sport. Imbalance is the issue. Between all the cooking and cleaning, there’s no time for sunshine. No opportunities for freeing “mobility screams” within walls.

Sometimes, even the thought of one instance of authentic freedom is beyond reach. “Ana sakna f 7bs” (I’m living in jail), multiple women have confided in me. This phrase specifically haunts me. My brain repeats it like a distressing mantra while I’m running. I run and run and run, trying to smash the phrase and its crookedness out of my mind as I pound the gravel. 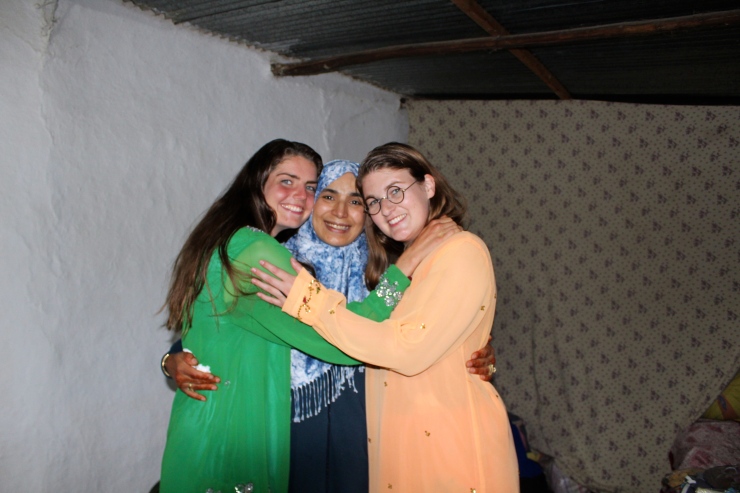 Many Moroccan doors lock from the inside and require a key to exit. Audrey once told me a story about a woman who was locked in her house and smashed the glass windows with bloody fists to escape. “It sounded like an explosion,” Aud recalled. People, even other women, just called her crazy. She finally cracked, but cracking isn’t socially acceptable.

If it were acceptable, maybe the majority of women would be smashing windows in pursuit of total freedom. Over half of married women suffer from domestic violence in Morocco, studies say. One of the most common forms of abuse is violation of individual liberties, victimizing 30 percent of married Moroccan women. 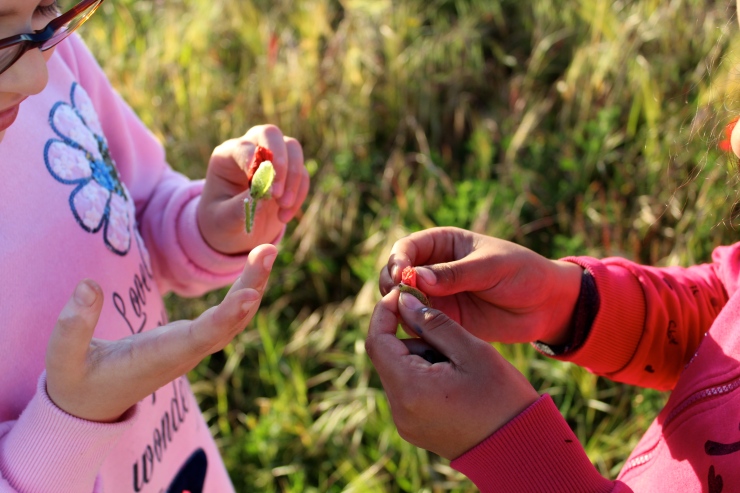 It’s challenging to feel alive in a community that encourages submission and silence. “Walakin hna baqi 3aishin” (but we’re still living), women often say after confessing their hardships. “Hna kansbro” (we’re patient), they add, as if to say they’re enduring life rather than living it. “Kolshi 3adi” (everything is normal), as if to say restraint is expected. “Hna wllfna” (we’re used to it), which is heartbreakingly true. 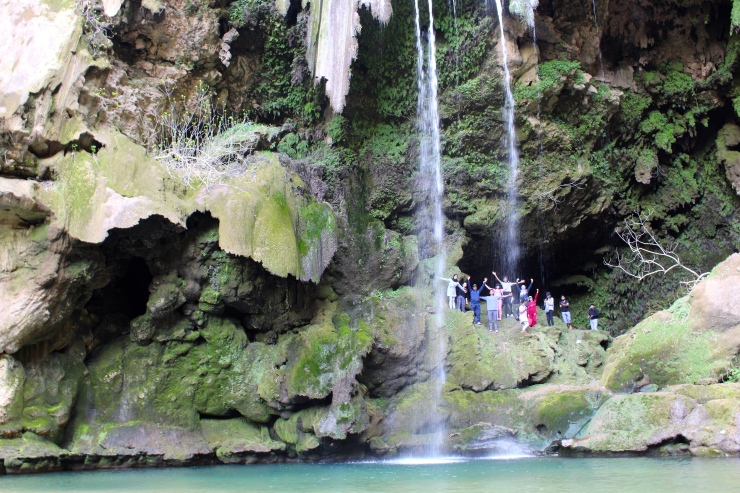 Though instances of authentic liberation are rare among women in our rural community, they’re sure catalysts for freeing yelps. They radiate a transformative spirit.

I feel it when dancing in women’s living rooms with jingly-belts tied around our butts, competing to see who can jingle the loudest. (I always lose). Climbing olive trees together far away from town. Playing smack-another-woman’s-butt-tag. One time, which still shocks me, we even competed to see who could yell ‘vagina’ the loudest in Darija. 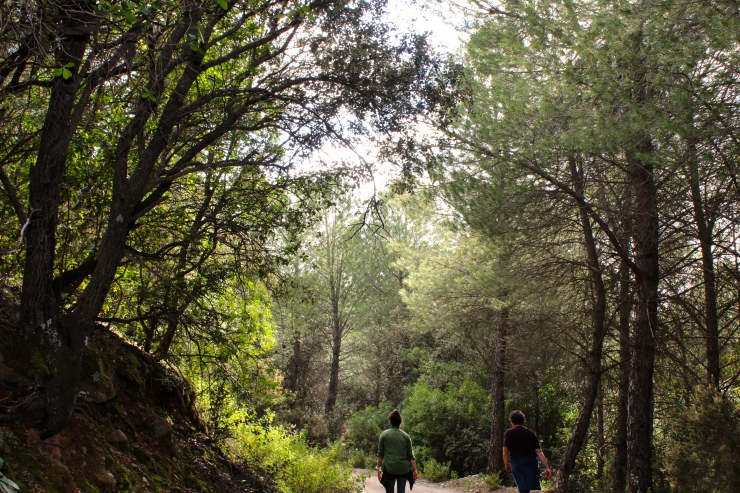 This uncensored energy fuels our aerobics classes, which started last winter when just four of us would jump around to pop music together in the youth center. Then one day, twenty women were waiting at the door. We switched to a bigger classroom, and we’ve been jumping around ever since. Sports bras are uncommon here, so women physically hold their breasts as we bop, and they love mocking me and my flat chest. We do one move that resembles putting on pants with a high-knee lift. “Jack-leeeen!” they yell above the music, stop making us put on more pants! We don’t want to wear any at all!

On women’s day, our girls’ empowerment club, Project Soar, organized the first-ever women’s day walk in town. Prior to the event, people were skeptical of the idea. Women were uneasy about the meeting spot since it was nearby a coffee shop and could potentially subject them to men’s stares. Other people thought the whole idea was silly or something I was arranging to try to corrupt women. As I jogged down to the meeting spot after finishing up an English class, I was prepared to see an empty lot. No women. No one is going to come, I convinced myself. As I rounded the corner, a herd of 50 women were waiting! “Jack-leen!!” they yelled, you’re Moroccan… you’re late!

To kick-off the walk, the girls’ empowerment team chanted their positive affirmations, first in Darija and then in English. “I am strong! I am smart! I am capable! I am a leader! I am a feminist! Girl power!!!” The women echoed the affirmations back in a glorious roar, fist-bumps included. An emotional, chill-inducing “mobility scream” of sisterhood and freedom. We felt alive. 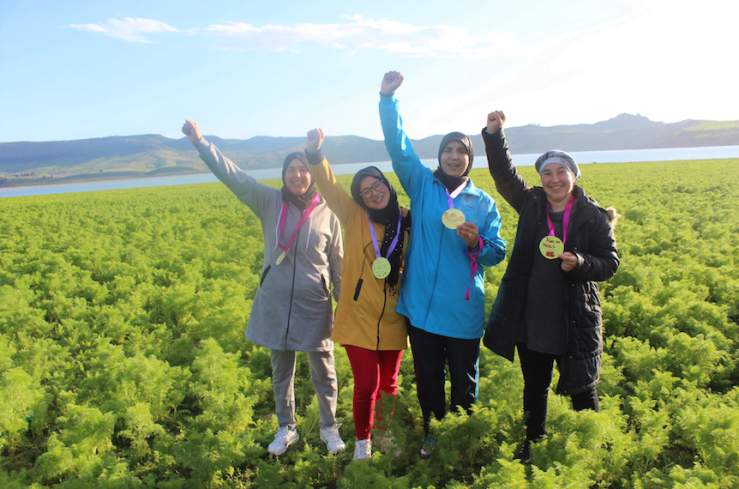 We should always feel alive, but we don’t. Restraints beyond our control may limit us. Social norms. Power dynamics. Laws. Toxic environments. Sometimes we limit ourselves. Fear. Habit. Complacency.

I have agency in my life. I have the power to feel alive and free, but there have been times that I’ve chosen not to exercise this invaluable privilege. I’ve never lived in a “jail” or a kitchen, but I’ve fallen into dull routines. I’ve chosen to exist in cubicles, social networks, unhealthy environments and superficiality. I’ve taken my freedoms for granted. 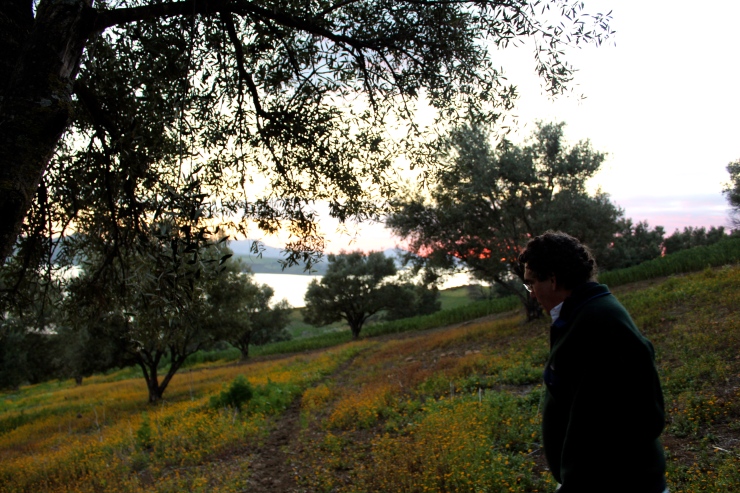 It’s our responsibility to seize our own privileges to help others feel alive. To carve out spaces so that we can all move seamlessly through landscapes. To have purpose. To feel safe and loved. To expand opportunities. To run wild. To climb all the trees, not just the ones outside of town. To crack without risk of being labeled as “crazy.” To yelp out of frustration or joy or anything at all. To scream. To create trajectories that don’t require taxing endurance. To transform enduring into living.

The worlds we build don’t have to be harmonious, but they should be worthy of lively cheers and hoots. I’m envisioning a future resounding with liberated yelps. The thought alone is exhilarating. It makes me feel alive.