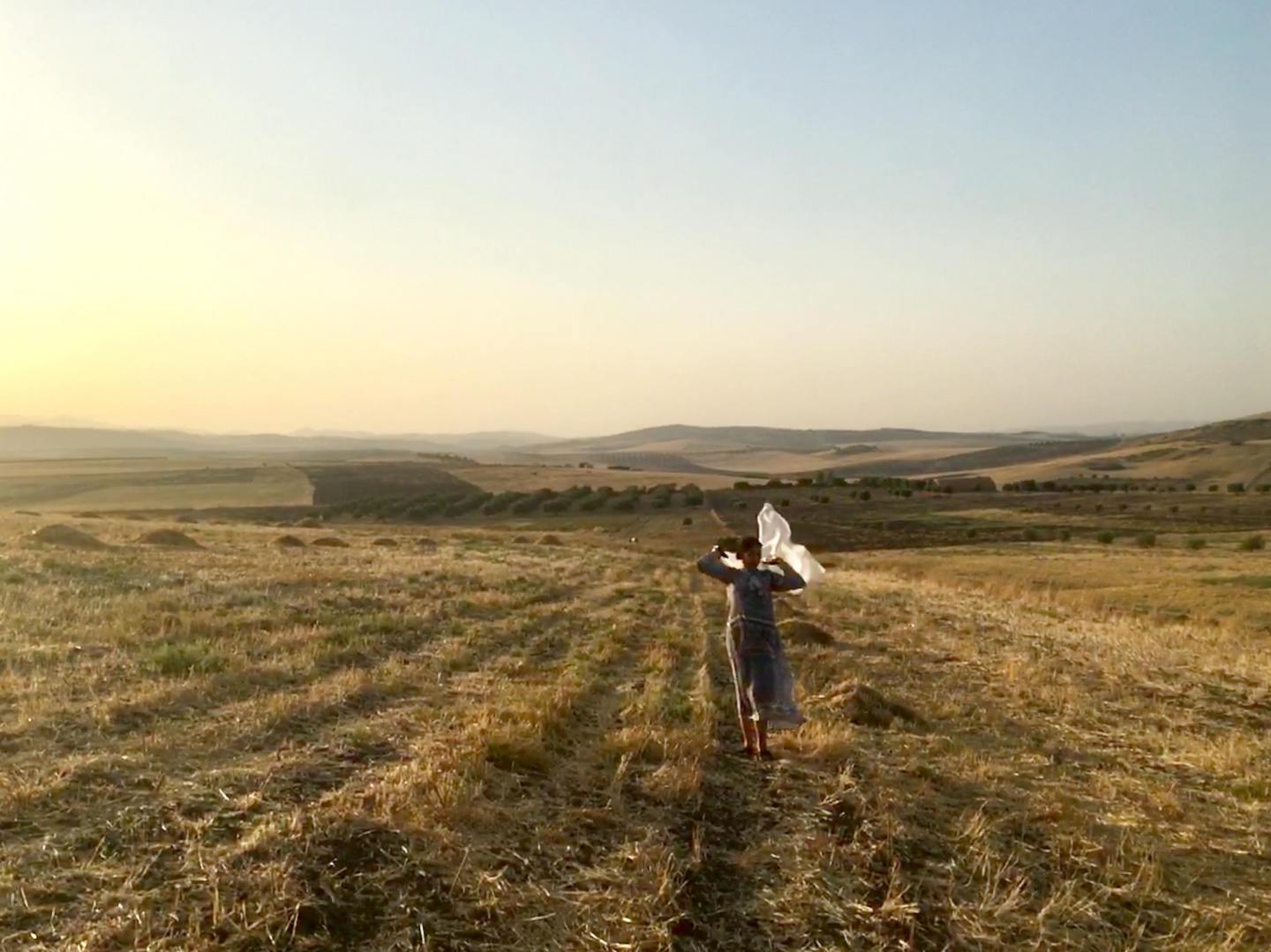 I’m terrified of stagnancy. “BE BRAVE,” I internally yell at myself in hopes of avoiding a mundane existence.

But bravery wavers. I’m scared of frogs, pessimists, disorganization, the game charades. I could go on for days. Point is: I’m actually an anxious lady. Often nervous. Sometimes defeated.

Writing about failure and hopelessness also spooks me. But hey, I want this blog to be authentic so BE BRAVE. 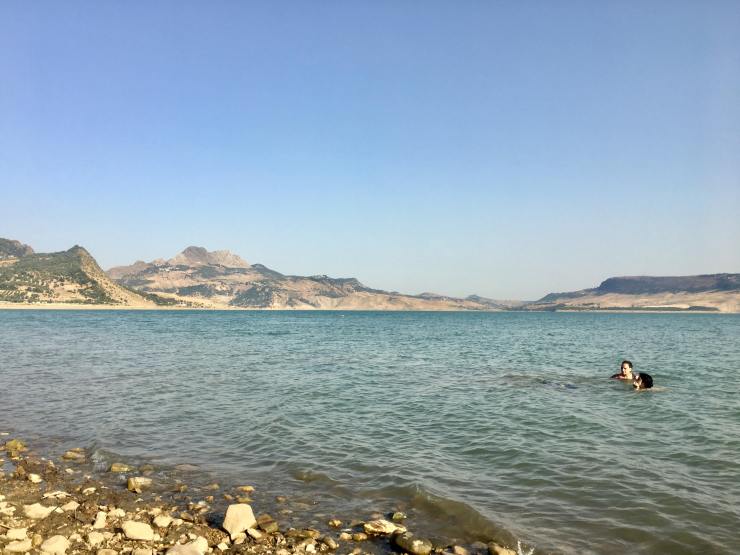 I’ve struggled with freedom. During pre-service training when us volunteers intensively studied Darija, I lived with a macho, dictator-ish host father. My independence of running wild in the woods between Mexico and Canada all summer dwindled to being trapped inside a house. I quickly fell from my all-time-strongest mentally and physically to the weakest and most out-of-shape I’ve ever been. I was anxious about the unknown. Where on earth in Morocco would I live for the next two years? Would I ever learn the language? Would I have friends? Please don’t plummet, mental health.

The first two months here in Ourtzagh cumulated to the most uncomfortable phase of my life. My presence – a single foreign female who can’t really speak – understandably made people uneasy. The associations Peace Corps suggested I work at were closed or didn’t want me. (Working with me meant more work for them). I was lost. I failed to invest in my stateside relationships while trying to embrace my uncomfortable life here. I didn’t immediately click with my new host family as I had with my previous host sister and mom, so I spiraled into thinking I would never be loved in Ourtzagh. I started running again, but a bit too hard, and gave myself a stress fracture. So I crutched around clueless for months: anxious, sweaty, insecure and lice-infested. 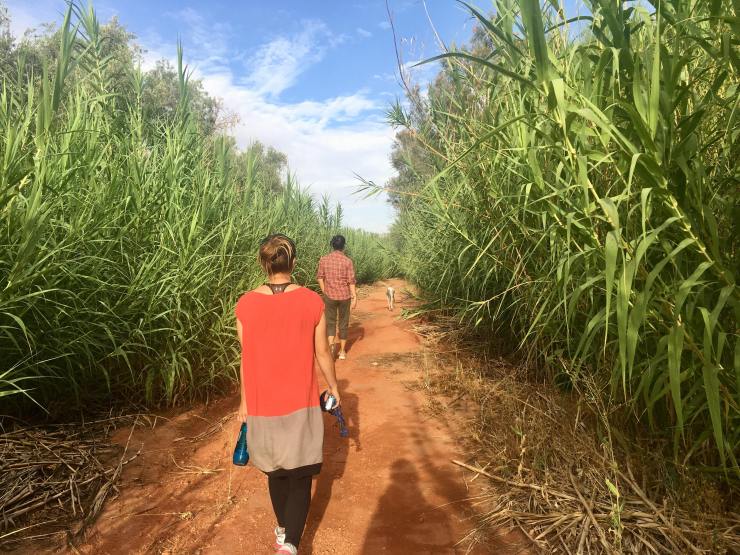 Eventually the obvious discomfort seized. I started teaching in an empty building, lost the cast and crutches, lost the lice, found a house of my own, found balance, found close friends and an overwhelming amount of beauty within humanity, Moroccan culture and unexpected connections. Overall, I feel like growth, positivity and pride are bubbling out of me. Nonetheless, I’m still struggling. Just like you, just like each and every one of us on this planet. 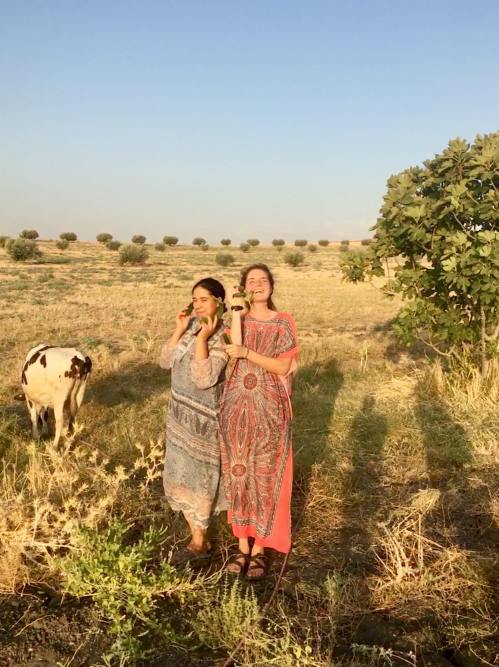 I’m not totally myself here. I dress like a potato sac. I can’t confidently express deep ideas in Darija. I’m judged if I laugh too loudly in public. I shouldn’t make eye-contact with men. My perceptions of gender are all scrambled. I miss my family and friends. I crave a schedule and respect for my time. I can’t honestly voice my opinions on religion, spirituality or social issues. No way can I talk about romantic relationships or my love for IPAs. I’m on guard at all times, trying to balance being authentic yet culturally appropriate.

I’m the town-pet of Ourtzagh. Kids point and yell “shufu!” (look!) to their friends when they see me like I’m a rare safari animal. Too bad I don’t have a smidgen of majestic-lioness in me. I can’t help but laugh, but I do crave more genuine, emotionally-rousing and intellectually-challenging relationships. All I have to say is thanks to the heavens for Radia, my 45-year-old soul sister who makes me feel accepted, respected, and loved. With her, I feel like I’m bundled safe in her warm pillowy bread, not like I’m a pseudo safari attraction. 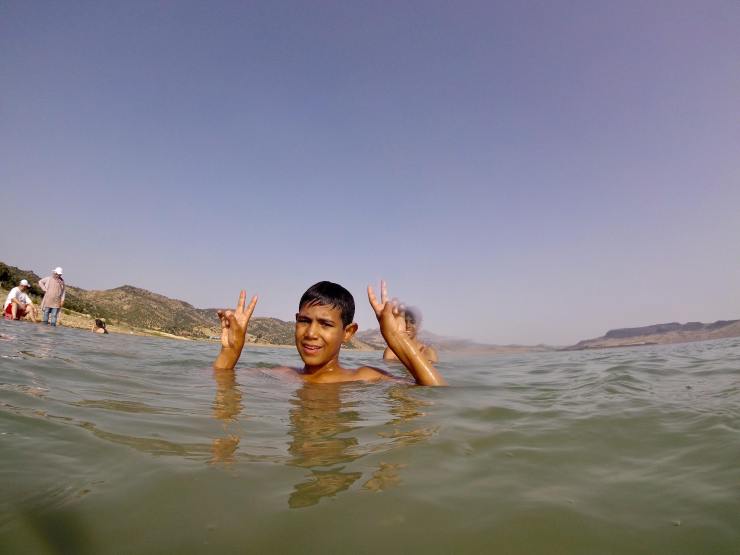 I got held at knifepoint in a Meknes, a big city far away from here. It could’ve happened in any major city and just as easily in the states. The experience definitely triggered my anxiety and made me reflect on my vulnerability in this world, especially in Morocco.

Across language and culture, I’m never truly aware of what people’s intentions are with me. Everyone is outwardly so kind and overwhelmingly welcoming, but I’ve discovered there are often ulterior motives: dreams of green cards, material wealth, climbing the twisted social ladder, a free English tutor or a wife and future-child-bearer for their son, brother, cousin, uncle, second-cousin, nephew, neighbor, friend, co-worker, or the random dude in town who went for a run once in his life so we’re clearly meant to be.

“I can’t even make bread!” I joke after any marriage request (bread truly makes the world go ‘round in Morocco, and there’s no way a marriage could succeed without it). But in my head I’m ranting, “It’s about time I and half the population are seen as more than bread-bakers with uteruses!!!!!!” 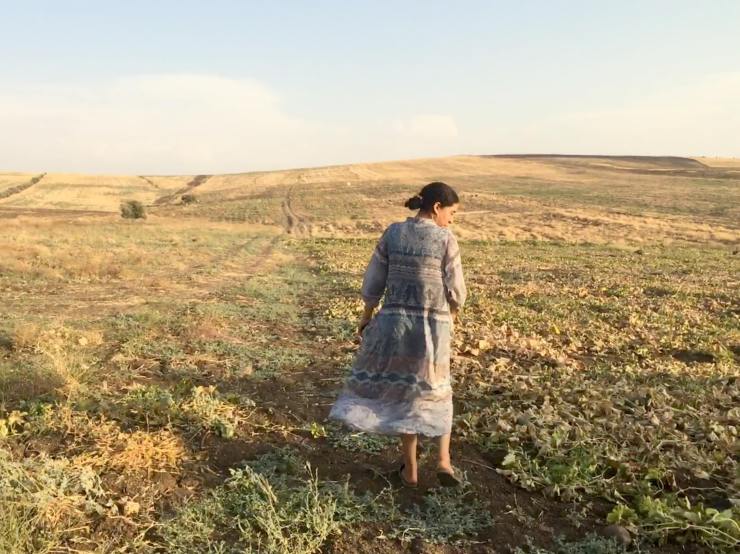 The prevalence of hegemonic masculinity gets to me. I’ve previously mentioned the unfortunate power complex that many Moroccan men struggle with (thus victimizing women), but the concept requires a follow-up.

I ignored the issue upon arriving to Morocco. As our man Maslow predicted with his hierarchy of needs, I first needed to learn basic communication and tasks, like eating only with my hands. But now, I’m a bread-utensil pro. The honeymoon phase of Morocco has fizzled out. The absurd is the new norm, and there’s comfort in this. I really do feel like I’m home as I wrote about last month. But like all my previous homes, the charm rubs off and the grime shines through. It’s time to put down my bread-utensils and take this heavy hegemonic masculinity power matrix off the back-burner. 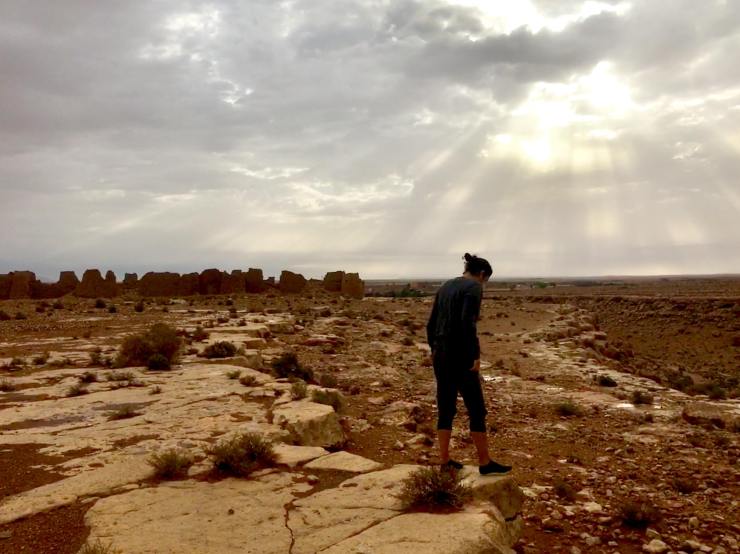 I realized I’m woven into the power complex of a man whom I’ve developed professional and personal relationships with. He builds me up, showers me with compliments, helps me with language, calls me his daughter and convinces me that I belong. Then he subsequently disrespects me by asking violating questions like if I’m a virgin. Invading my privacy by sneaking through my phone. Guilt tripping me about commitments I never made. Disrespecting my body by grabbing my calf muscles that he is weirdly fascinated with and openly raves about. He exerts his power in subtle ways like making me (but not other females) cover my shoulders when I’m swimming.

It now seems obvious that it’s not a healthy relationship, but it’s hard to distinguish cultural differences from incorrectness.

I experience waves of vulnerability, dissappointment and hopelessness. Thankfully, they’re followed by rushes of empathy, patience and forgiveness. Humans aren’t bad, I remind myself, but we do bad things. Sometimes these bad things are normalized and excused by the environments surrounding us. We’re often oblivious, unfortunately, to our own powers and the effects that we have. 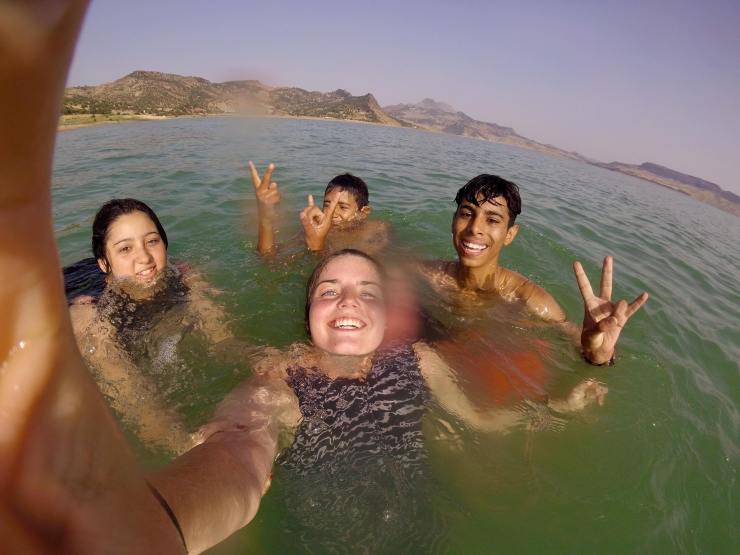 I’ve been sleeping out on my roof lately, and I stargaze until I can’t keep my eyes open any longer. There’s a cat on the neighboring roof that sometimes hops over to gaze with me. This would be nice if I liked cats. I stare off at the stars, planets, the moon and meteors twinkling above and think about how tiny and insignificant my problems and I are in this universe.

Calmness and gratitude fill me up. I reflect on how much I’m growing from this experience and what a grand adventure it is. I dream about my adventures after Peace Corps, ones with my shoulders happily uncovered and no qualms about the volume of my laughter. But then the sensational flood of optimism, gratitude and calmness halts. I’m reminded of the Moroccan women whom I love so much that will be here in the exact same spot that I left them. In their kitchens. 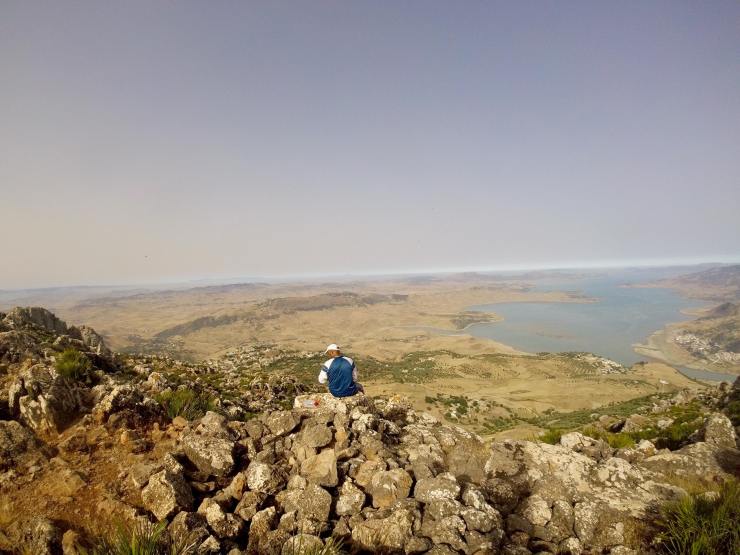 And this, the masked injustices of the women around me, is my biggest frustration of all. It’s tons heavier than the cast, the crutches, the lice, the language, and the lack of direction.

One woman recently opened up to me about her marriage and it’s toxicity behind closed doors. “I want to leave,” she explained. “Where do you want to go?” I asked. “To the land of fegoose (Japanese cucumbers),” she joked. We laughed. Then, hopelessly, she added, “I have nowhere to go.” So we cried. 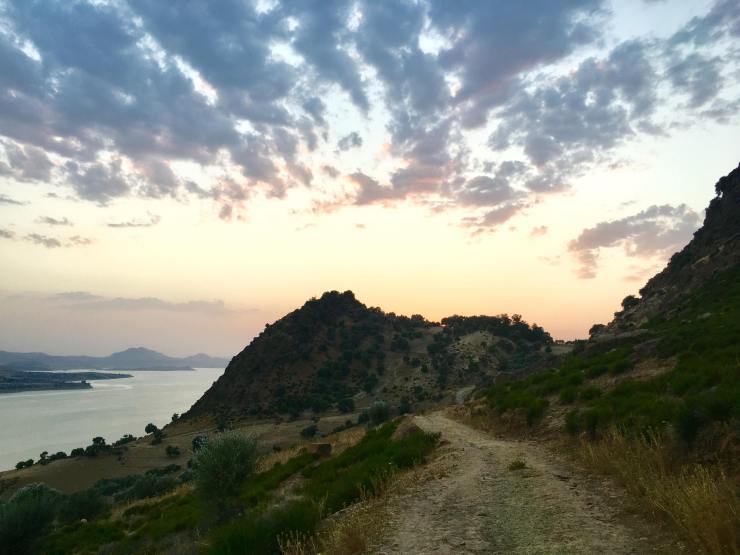 These are samples of my experiences, and shouldn’t be generalized to all Moroccan men or women. I have seen supportive marriages, but I usually see a stark imbalance of power with a forceful set of rules for women to follow. There are consequences if the food is late, the kitchen is messy, they leave without permission, and even if the wind blows their clothes against their bodies exposing their feminine outlines. “That’s the weather’s problem!” I protested upon hearing this. “Not in my husband’s eyes,” was the response.

This power is subduing the bravery of women. “Hna wlftna” (we’re used to it) they say, and I understand this habituation. Just like I’ve become accustomed to marriage proposals and manipulation, they’ve adapted to the world around them. For them, this isn’t one grand old adventure. This is reality. A reality that breaks my heart. 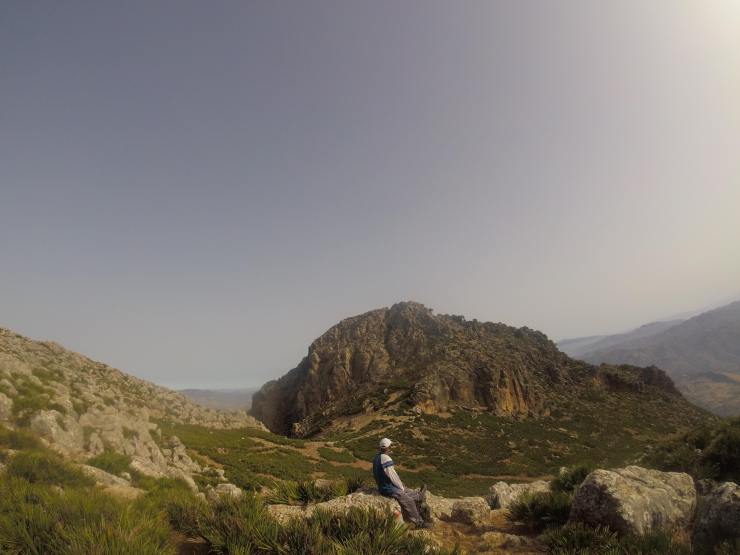 I’m holding out hope because I know the strength, bravery, patience, intelligence and resiliency of these women. They run Morocco. Truly. It seems like the average man can’t even get himself a glass of water.

In 2004 there were huge advancements in the “mudawana” (the family code) of Moroccan law. It split lawful responsibility of the family between both spouses and raised the marriageable age to 18 (although many women still marry prematurely behind closed doors or with a little cash to keep it quiet). With the update, women now have the right to petition divorce, they can’t be married against their own will, and husbands need consent from their first wives if they want a second wife.

People say life is changing, and I believe it. The majority of girls are pursuing education and thinking about their careers, but just last night one of my best students told me she’s no longer going to college. Instead, she is marrying a wealthy man that she barely knows in two weeks. “Wash nti farhana?” (are you happy?), I questioned. “Ana khayfa” (I’m scared), she admitted.

I’m scared too. I’m scared and angry and heartbroken. 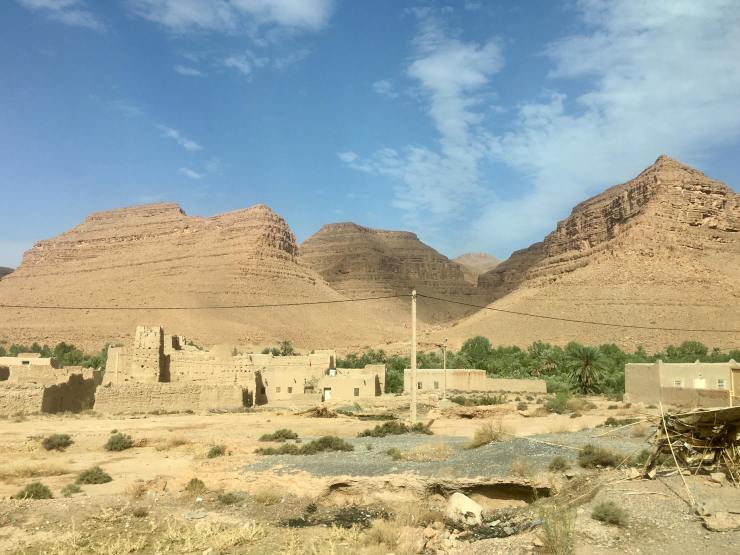 A couple of weeks ago, two of my Moroccan mamas planned a day-trip for our two families. They packed rugs, blankets, clay tajines, four meals worth of food (2 rounds of lunch!), changes of clothes, games, everything. A luxury day-trip. No pb&js here. “Ntuma qiyidet dyalna” (you’re our leaders!) I praised them, only to be interrupted by the men of the families claiming that they themselves are the true leaders of this extravaganza. “MESHI DYALI!” (NOT MINE!), I yelled and stormed out of the room.

I’m starting to crack. Cracking for myself. Cracking on behalf of those who don’t have the freedom to crack. 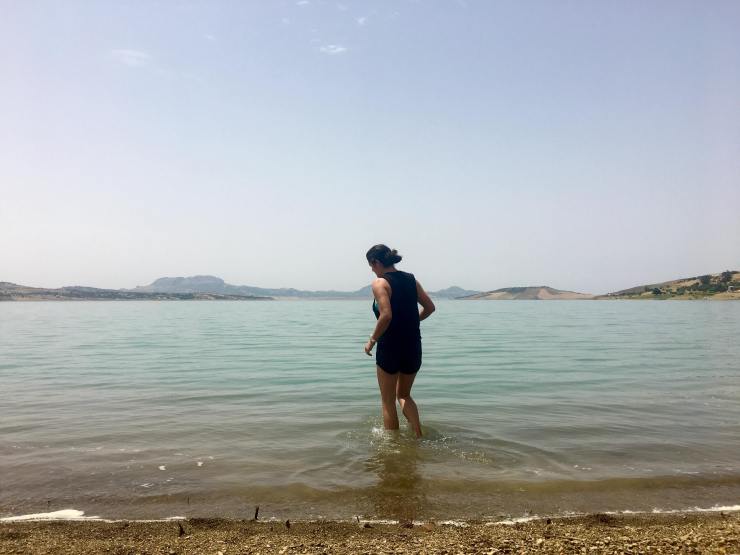 I’m awed by the human ability to adapt. We can rise up, be brave and do things we never imagined, but this adaptability also allows us to fall into holes, get stuck and become used to it. It allows us to forget our bravery.

So I need to keep yelling it. BE BRAVE. Be brave in using my freedom to respectfully confront the disrespect around me. Be brave in allowing myself to open up and feel the frustrations of others. Be brave in navigating these confusing masculinity-power-infested relationships. Be brave in my Peace Corps work. Be brave throughout my vulnerability. 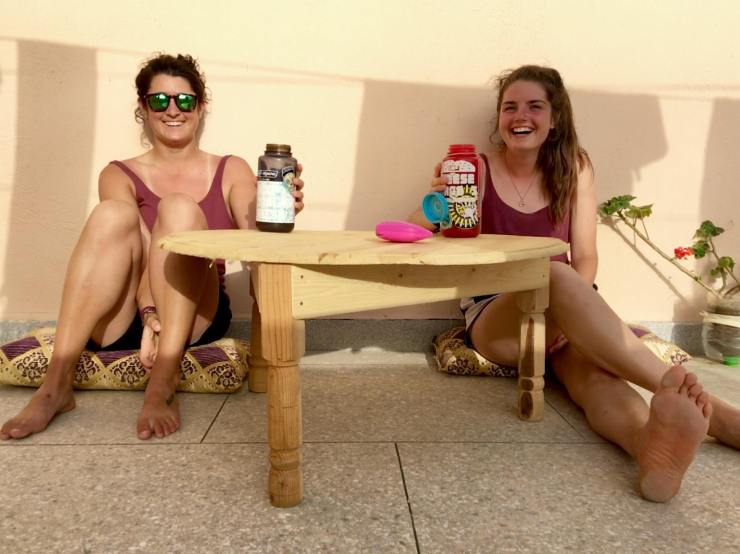 I fear that nothing will come from it, but there’s that collected, calm, optimistic and empowered part of me that’s still shining. I hope this bravery I’m trying to cultivate wears off on someone so that we can be brave together. It’s my motto, and I hope someone else’s too.